March of the Gore​-​Stained Axe Tribe

by A Band of Orcs 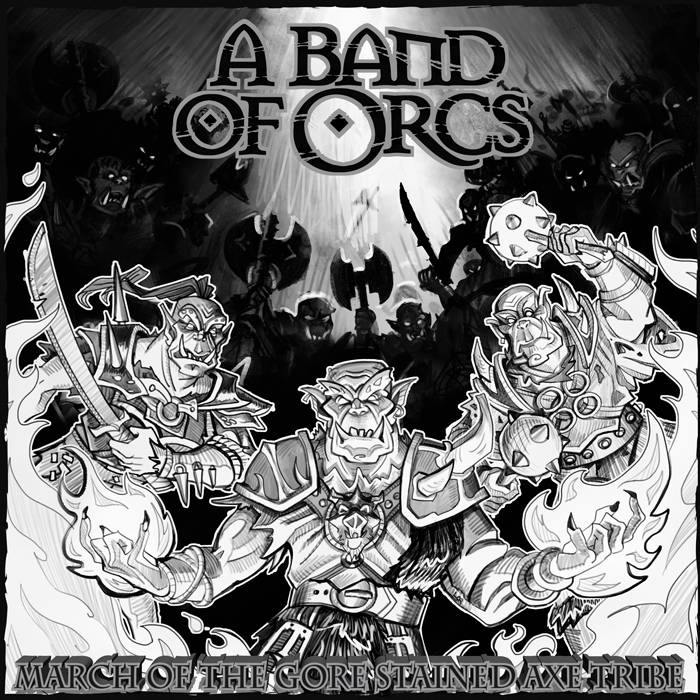 Myrkviðr I discovered you guys a few days ago traveling across the wizards realm the web. Hail from the large land of Texas I raise my Battle Horns to you all ! Favorite track: Heaving Death.

Andrew Cook/The Great Mackintosh Anything by these guys is heavy shit. Ignore the imagery if you think it's silly, the music stands for itself. Favorite track: March of the Gore-Stained Axe Tribe.

Formerly a 5-piece war machine A Band of Orcs returns on this demo with Oog, Cretos, and Gronk! as a death metal trio in the wake of the untimely demise of former WarChiefs.

The trinity carries forth the metal banner of A Band of Orcs with their newest Digital Triple release entitled "March of the Gore-Stained Axe Tribe."

Recorded at Trident Studio with Engineer/Producer Juan Urteaga (Machine Head, Testament, Hatriot), this three-song demo is a warning flair to humanity signalling the savagery to come in 2015.

Track 1: "Chata Urklud Cruaksi" is a traditional battle chant of the Gore-Stained Axe Tribe, delivered in the native Hirntodian Orc tongue, accompanied by Oog's drums of war and the instrumental sorcery of Cretos and Gronk!.

Track 3: "Heaving Death" is the name of a plague found in Hirntodia. The song relates how Cretos became orphaned from his original people, the Twin Blades Tribe, when the yellowed-robed priests of the pestilent sign sailed their black ship into the harbor of his former home, Trito Craa Sertrob, unleashing the alchemical plague upon his once mighty folk, utterly decimating them. Suddenly cast adrift from his former people, this is the reason Cretos came to fight his way into the Gore-Stained Axe Tribe.

If you are part of the Bay Area California Tribe and go to the raid with D.R.I. on April 3rd you will also have a chance to meet the newest and 4th member of A Band of Orcs going forward, bass-player Srig Foehammer, who was liberated from the slave mines of the Hill Giants when the WarChiefs incited an uprising to defeat the horrid flesh traffickers – a tale told in the song “Of Broken Chains & Shattered Skulls” on the last concept album “Adding Heads to the Pile.”

The next chapter in the Mythos of A Band of Orcs begins with a line-up change and new tales with the “March of the Gore-Stained Axe Tribe” digital release. So, enjoy the latest offering to Gzoroth from A Band of Orcs – “Raise your axe, raise your shield, raise your Tusks high!!!”

Produced, Engineered, Mixed and Mastered by Juan Urteaga, Executive Producer Gruesom Grimp, all songs by A Band of Orcs and the Gore-Stained Axe Tribe. Cover Art by Lorraine Schleter.

A Band of Orcs Capitola, California

A Band of Orcs hail from Hirntodia. They came to Earth realm via a popular role-playing game played by a group of human children, who are now dead. The Game Master's older brother, Jed, saved his own life by offering to teach the Orcs to play guitar. SLAYER's "Reign in Blood" play in the background of Jed's room and eased the rage of the beasts. They use this magic called metal for Domination. ... more

This is the march of the Gore-Stained Axe Tribe
Raise your axe, raise your shield, raise your Tusks high!
We are the Warriors of the Gore-Stained Axe Tribe
We fight to live or die - For the Tribe! For the Tribe!
If we live, we live to fight another day.
If we die then it's off to stay in the hall, in the hall, of the Ancestors
Where their skulls line the walls!

I raise my Tusks to you, warriors of forgotten time
Ancestors fallen in battle, for you I make the sign.

This is the march of the Gore-Stained Axe Tribe
Raise your axe, raise your shield, raise your Tusks high!
We are the Warriors of the Gore-Stained Axe Tribe
We fight to live or die - For the Tribe! For the Tribe!
If we live, we live to fight another day.
If we die then it's off to stay in the hall, in the hall, of the Ancestors
Where their skulls line the walls!

My spirit soars back through the mists of time.
To Grendel standing on the hill.
Beset on all sides by a sea of enemies.
For him, We make the sign!

It was
In the Age of the Goat, Year of the Manticore
Invaders came to rape and slave
To steal our caves, their golden veins
And gild their cities with this shame.

Justified by their Book of Lies
Foul alliance - Elves, Dwarves, and Men
Dressed up their greed as noble deeds.
Legends sang them heroes in end.

The Agromegh,
He stood his ground, with hand on axe he vowed
His progeny, eternity
to serve the Dragon's Ancient Ways

He spoke the words
He made the sign
Dragon awoke and turned the battle tide
With the lightning that slashed across the sky
Blood, Screams and Gore - the Founding!

Trito Craa Sertrob Dominates the sea
A fortress of brutal majesty
Ancestral home, Twin Blades Tribe
On its walls invaders died.
Spires of Blackened steal stabbing toward the sky
Envied by the Kingdoms, the Urklud's pride
Lord of Fish Lanes, Marauder's Scourge
Never fell by siege
Or in war

One New Moon Night
A Black Ship came
Ambassadors of the Pallid King entered the bay.
With gifts in hand,
Brought drought relief
"An elixer sick stock," claimed the

For the once mighty orcs of the Twin Blades Tribe
The card is dealt -- the Black Ship!

Let the red dawn surmise
What we shall do
When this blue starlight dies
And all is through
-- R.W. Chambers
The Yellow Sign

That New Moon Night
When the Black Ship came
Ambassadors of the Pallid King
Whispered their say
With twisted words
Offering relief
But Madness reigned that night, whence came the

Vomiting blood, brain sickening, black scabs on skin
Entrails rupturing
The Heaving Death, Necromancy, Dark Sorcery
Invisible enemy
Breeds in the Mind, spreads through the Mist
Invades when we breathe
How can I fight a foe I cannot see?

Bandcamp Daily  your guide to the world of Bandcamp